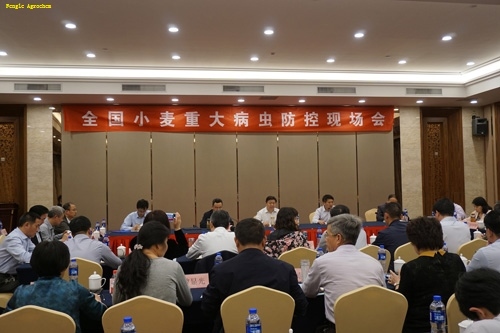 Influenced by the high temperature and more precipitation last winter and this spring, wheat mildew in the middle and lower reaches of Yangtze river, Jianghuai southern wheat area of Huanghuai is in a heavy trend, constitutes a serious threat to the stability production of wheat. The fungicide "Propiconazoel + Thiram 31% SC" of Fengle Agrochemical was used to control the wheat mildew. The product not only has obvious anti-effect on wheat mildew, but also has a prominent effect on white powder and rust, has obvious effect on protecting leaves, anti-senile and volume increase to wheat, since it went public in 2016, it has been recognized and welcomed by the market. At the trend meeting of wheat mildew in Anhui province on March 22th, 2017, Propiconazole + Thiram 31% SC has become the key recommendation of the PPU in Anhui province.

Protect the green life, get golden harves, Fengle "Propiconazole + Thiram 31% SC" will carry the banner of prevention and control, practice the mission of Fengle, do a good job of wheat pest control, helping the wheat harvest, protecting the interests of farmers.